Home › Stories › A Message of Hope

A Message of Hope 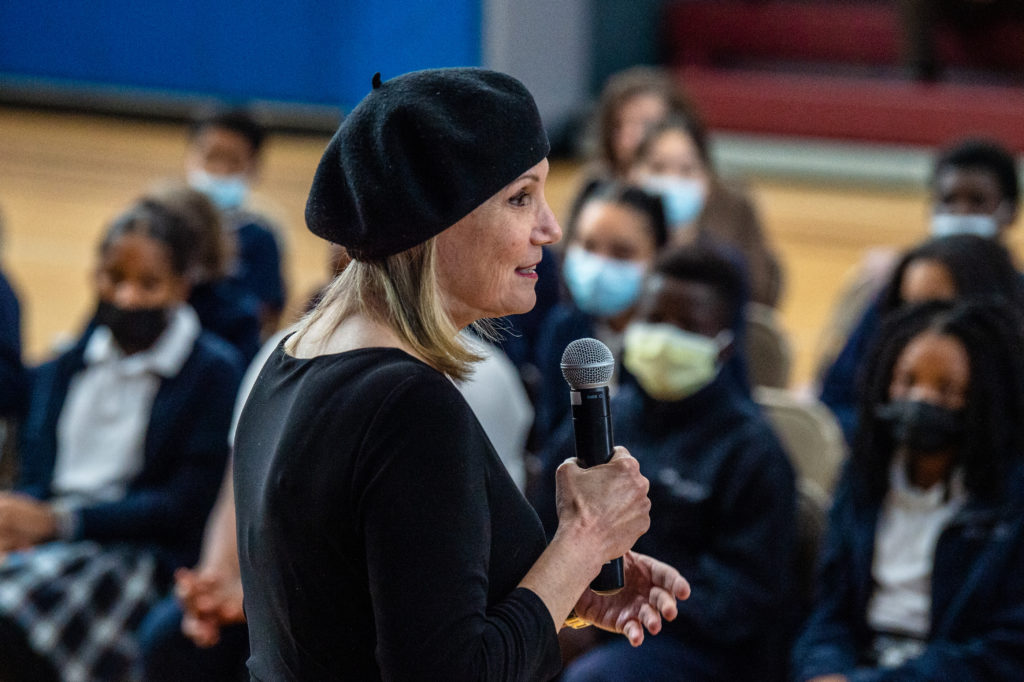 More than 90 young students at St. John Paul Catholic Academy (SJPllCA) in Dorchester were captivated by a visit from Emmy nominated classical pianist and author, Mona Golabek, who shared with them an extraordinary story of perseverance and hope. Golabek is the author of the best-selling book, The Children of Willesden Lane, which recounts the story of her mother, Lisa Jura, who as a teenage Austrian Jewish refugee held onto her dreams, survived the Holocaust, and inspired a generation of her contemporaries.

Jim Walsh, President of the Campaign for Catholic Schools (CCS), spearheaded an effort to bring Golabek’s Willesden Lane books into CCS inner-city academies in Boston and Brockton as well as to more than 5,000 students throughout New England to share the timeless message of never giving up on your dreams and doing the right thing in times of hardship. Walsh, in partnership with the USC Shoah Foundation and the Hold On To Your Music Foundation, coordinated a Willesden READ pilot program for more than 100 teachers at New England Catholic schools to guide curriculum instruction and classroom activities centered on the three editions of the book (each geared to different ages groups), deepen their understanding of the historical context of the books, and learn to incorporate companion resources found in IWitness, USC Shoah Foundation’s educational website, into their classroom and student teaching.

The live question and answer session after Golabek’s presentation to the SJPIICA students was held the day before a national program was streamed via Discovery Education to more than 11,000 students of the Archdioceses of Boston, Fall River, and Bridgeport, CT. The program featured Golabek’s adaptation of her book into a live theatrical and musical performance sharing her mother’s inspirational story of survival and hope. Before meeting with academy students in Dorchester, Golabek performed an abridged version of the program for Cardinal Sean O’Malley in the newly renovated historic Cathedral of the Holy Cross.

Her story begins with a young and talented Lisa Jura studying piano in her beloved Vienna as the Nazi regime begins to ratchet up its atrocities against the Jews. As she played the piano for the Cardinal, Golabek told of the agonizing decision her grandparents had to make in choosing which of their three daughters to send on a train to London. “Families were desperate to get a spot on what was known as the Kindertransport – or the children’s rescue train,” Golabek explained to the Cardinal. “My grandfather came home one night and announced to his family that he had gotten one ticket. Three daughters. Who would they choose?”

Golabek’s mother, Lisa, was chosen and survived the war along with other Jewish refugees in a house on Willesden Lane in London. Lisa’s story of survival, hope, and following one’s dreams is memorialized in Golabek’s books, copies of which she presented to the Cardinal and later signed for students. O’Malley noted the eerie similarities to events occurring today in Ukraine, where in spite of hatred and prejudice, there are signs of hope.

“You see the goodness and the love that comes out in people in the face of all this evil,” commented Cardinal O’Malley. “And that is a sign of hope. We certainly see that in today’s world in how people are responding to the refugees. And, of course, Mona’s message is such an important one because prejudice and hatred are things that are taught to children. And it’s like a hereditary disease that’s passed on from one generation to the next. So, teaching young people to love and feel their humanity and their connectedness to everybody in the human family is such an important message.”

Golabek’s efforts – in partnership with the USC Shoah Foundation – to bring this story to the world is aimed at preventing the past from repeating itself. Founded by Steven Spielberg, the USC Shoah Foundation is the world’s largest archive of oral history on genocide. Its mission is to develop empathy, understanding, and respect through testimony.

“Follow your dreams,” Golabek told the students at SJPIICA. “Be someone who stands up for what’s right in life. Follow your dreams. We must come together as a human family. And, of course, what’s happening in Ukraine – in Russia – right now is just heart-rending. But at the same time, these terrible events – like the Holocaust itself – bring out the worst and the best in people.”

“The powerful combination of the music and the story itself leaves a lasting impact,” commented CCS President Jim Walsh.  “It’s amazing to see how Mona’s books have resonated with the students at our CCS academies. They have been truly inspired to follow their dreams.”

SJPIICA teachers told Golabek of the powerful impact the books – and Lisa Jura’s story – have had on their students as an extraordinary example of perseverance through overwhelming life challenges. “My scholars have demonstrated empathy for Lisa Jura as I have never witnessed for any other protagonist in my many years as an educator,” said Rhonda Eaton. “She is real, heroic, and could be any one of us; she proves that children are our greatest natural resource and should be cherished.”

PrevPrevious Story2020 Annual Report
Next StoryBack Together to Celebrate CCSNext